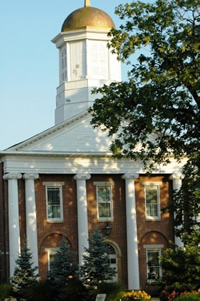 The original portion of the Highland County Courthouse is the oldest courthouse in continuous use as a courthouse in the State of Ohio. It was built from 1832-1834 at a cost of $6,666.66. In 1883, an addition to the west end of the original courthouse building was constructed. In 1895, the county constructed a jail and sheriff’s office on the north side of the Courthouse.

In 2001, the county opened a new justice center on the north end of Hillsboro which now houses the jail and sheriff’s department. In 2003, an addition on the west end of the courthouse was added to install an elevator and to connect the old sheriff’s department and jail which now houses the Prosecuting Attorney’s office and the law library. One of the jail cells from the old jail was left intact and can be viewed by visitors upon request.

Until 1976, the Courthouse housed most of the county offices. It now houses the Probate-Juvenile Court facilities and the Clerk of Courts on the first floor and the Common Pleas Court General and Domestic Relations courtrooms and offices on the second floor. The offices of the other county officeholders are located in the County Administration Building located on the other side of Governor Foraker Place across from the Courthouse.

Article IV, Section 4 of the Ohio Constitution of 1851 created a common pleas court in each county and divisions thereof as may be established by law. Those judges who have served in this Court since that date are believed to be as follows:

Persons summoned for jury duty on March 23 and March 26 do not need to report.